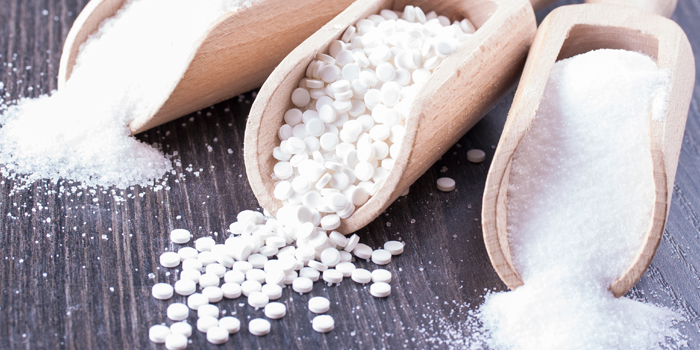 Why would artificial sweeteners lead to weight gain?

There is a system in the brain that senses and integrates the sweetness and energy content of food. Animal studies have found that after eating a diet containing artificial sweeteners the animals eat about 30% more. This is thought to be because the brain’s reward centre associates the sweet taste with energy content. When the sweet taste is out of balance with energy intake for a period of time the brain recalibrates and increases total calories consumed.

There is now a large body of evidence showing that using sweeteners such as saccharin, sucralose and aspartame may lead to increased food consumption, reduced metabolism after meals, increased weight gain, greater percent body fat, and hyperinsulinemia (excess insulin production which leads to weight gain), compared with animals exposed to plain water and even to sugar-sweetened foods or liquids.

This helps explain why large scale and long term studies on humans find that increases in weight and abdominal fat are observed among participants who use diet sodas and artificial sweeteners daily (1).

Furthermore, frequent use of diet drinks and artificial sweeteners has been associated with increased risk of hypertension, metabolic syndrome, diabetes, depression, kidney dysfunction, heart attacks, strokes, cardiovascular disease and total mortality (1,2).  It turns out that “sugar free” foods and drinks may be having more negative impacts on health than previously thought.

In addition, the production of low calorie drinks has negative consequences for the environment, with up to 300 litres of water required to produce a ½ litre plastic bottle of carbonated soft drink.

How to Encourage Healthy Eating in Children